A team of “Gronk Nation Boston 2017” runners who finished the Boston Marathon this week on behalf of the Patriots tight end raised $90,410 for the player’s foundation.

The group of 10 runners fundraised for the Gronk Youth Foundation, a non-profit started by New England Patriots player Rob Gronkowski and his brothers to help children engage in sports, fitness, education and community.

The family’s organization participates in events across the state to raise money, including other races like the Falmouth Road Race this coming August. From May to June, the foundation will host a Rob Gronkowski Football Camp for children in elementary and middle schools. 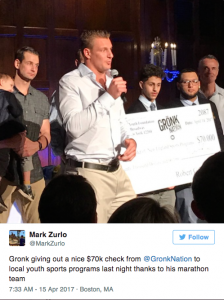 In a statement, “Gronk Nation” said Gronk joined his father and brothers in giving $70,000 to private Catholic school, Cristo Rey Boston High School, last Friday. The family offered the marathoners some Gronk-only perks, like riding on the “Gronk Bus” and having a Gronk Fitness crew cheer them on at the finish line.

This article originally appeared on MassLive on April 20, 2017.

A caravan of aunts, uncles, and cousins drove Alexandra Bernadotte from Mattapan to Dartmouth College in 1988, a triumphant parade of sorts for the Haitian immigrant family. But if getting into Dartmouth was a dream come true for Bernadotte, graduating … Continued
Troy Seppala, student of Communication at the University of Colorado, is in the first generation of his family to attend university. He transferred to CU-Boulder from a community college in his hometown of Vancouver, WA. Now entering his final semester … Continued
As the Trump administration takes aim at race-based college admissions policies, many of the country’s most competitive schools, including Ivy League universities, are struggling with an equally vexing problem: how to create more economic diversity on their campuses, giving strong … Continued